Radio was more fun and unpredictable in the 1980s and early ‘90s thanks to air personalities such as Cleveland Wheeler and Mason Dixon, who were featured in our November 1988 and October 1991 cover stories, respectively.

In ’88, both were at the top of their game and working under the same roof, Q105 in Tampa, where Wheeler was co-creator of the wacky Q Morning Zoo and Dixon was the station’s effervescent afternoon drive guy. Few stations in modern radio history have dominated a market—or influenced their industry—as they did together. 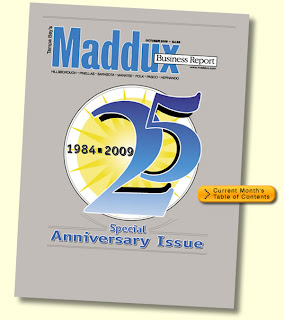 But it was not to last.

Three years later, Dixon jumped to Clearwater-based Mix 96, where he shook the market again as host of Tampa Bay’s new #1 morning show. Today, Dixon is back at Q105 (now located in St. Petersburg), this time as the morning host, but things are far different.

Earlier this year, the once legendary Q laid off its entire air staff, keeping only Dixon. And Dixon—who survived a nearly deadly car crash five years ago—is programming Q105’s online, HD2 radio station, “The Faith,” which he calls “the most listened to Christian hit music station on the web.”

“The accident brought a lot of things home to me,” Dixon says, “what life is all about and how close you can be to almost not being here. It really moved me to do something bigger and better.”

As for Wheeler, he’s on the outside looking in.

He spent several years creating and programming a commercial-free, ‘60s music station at XM Satellite Radio. Before and since, however, several comeback attempts—including one at Tampa Bay country station WQYK—fizzled.

He is currently living in Galveston Beach, Texas—“ looking across the water with binoculars at you in Tampa Bay”—hoping to get back in the game one more time.