Fifty years in the commercial real estate business.  That’s a huge milestone for Lakeland-based Hauger-Bunch Inc., to be sure, but company president David Bunch says it’s not going to be a year full of celebration.

“You want an honest answer? I don’t have a clue,” he says. “Too many things at play that no one knows what to do with. I think it’s going to be the same (as last year). I don’t see anything too drastic changing it one way or the other.”
The prolonged land, development and leasing slump—and that’s probably too mild a word, but who wants to use the “D” word?—is not unlike some other memories Bunch recalls from his five decades of sales and the 800 businesses his company sited in those years.
“We’ve been through some funny times in those years that, to me, were as painful as this is,” he says.
But—and this is the key, he says—he’s not giving up.
“I have to be positive or I couldn’t sell anything,” Bunch says. “This country is not out of business. There is pain, there is suffering, but 85 to 90 percent of the country is working—contrary to what some people seem to think. So we look for the business. Somebody is doing something somewhere and we’ll go there.”
Seniority earned Bunch the right to sound off first in the Maddux Business Report’s annual commercial real estate outlook, but his views could have come from virtually anyone we surveyed. The prognosticators are uniformly sour on the months ahead, their eyes and hopes already locked on 2011, one hand clamped on their nearly empty wallets, the other covering their erratically beating hearts.
There’s enough blame to go around, but government gets a lot of it. Disappearing jobs are a huge issue and lost jobs translate into empty office, industrial and warehouse space.
“I don’t think I’ve seen anything of this magnitude in the years I’ve been in the business,” says Robin Bishop, president of Tampa-based Robin Bishop & Associates. “There is light at the end of the tunnel but I think we’ve got another year or so of this. The statistics are pretty startling. In every class of space, in every submarket, there has been negative absorption. When you see Westshore at 20 percent vacant… Not that long ago it was five percent. The most staggering statistic is in the Westshore submarket—750,000  sf of negative absorption. I don’t think you’ll see any new buildings come out of the ground anywhere in Tampa.
“We need jobs,” she adds. “That’s dragging us down here in Florida, particularly in Tampa.”
Steve Kossoff, managing director of Meridian Development Group in Clearwater and Sarasota has seen a little more activity—busywork, you might call it—but overall, it’s the same mindset as 2009.
“Last year,” he says, “Southeast investment sales were off 78 percent compared to the year before. It was abysmal. Leasing is at a snail’s pace. Vacancies are up, rates are down. The Sarasota-Bradenton market is almost unrecognizable compared to 2006-07. There is just nothing going on. It was so reliant on tourism and never diversified into other employment; now they’re left trying to pick up the pieces. It’s very tough sledding there now. A 70-person architectural firm we dealt with is out of business. The engineering firm we use laid off half its staff. We’re just managing our legacy assets. We haven’t bought a building in two years.
“Candidly,” Kossoff concludes, “I think we’ll be talking a year from now and be seeing some tangible improvement to the market. But I think it’s going to take another year.”
No argument there, says Hogan Group CEO Mike Hogan.
“Two-thousand-and-nine, in my opinion, was horrible,” says the Lutz-based developer. “There was virtually no leasing activity. There was no development because the banks aren’t loaning money. They say they are, but there is no demand. The economy was horrible. We had four or five projects that just stopped. Pieces of property we had, including a Kohl’s Department Store, were put on hold. And for the record, ‘08 wasn’t much better than ‘ 09. We are seeing an increase in office and retail traffic. Not deals, but people walking in the door, wanting to look at space for probably the first time in three years.”
Tampa real estate attorney Ron Weaver can tick off all the ways that the commercial real estate business collapsed—although Stearns Weaver stays pretty busy as a result of the fallout. “Office continues to freefall,” he says. “It’s going to have an awful year. The 17 percent official vacancy rate is probably closer to a true 30 percent. Technically you’ve got a tenant who may be paying rent or reduced rent but it’s on available space. You can go to a company and maybe they’re using 70 percent of their space and you could ask them to sublease 30 percent and they’ll say, ‘Please!’”
One of the issues hampering commercial real estate is the real or perceived collapse of the loan market.
NorthMarq Capital Managing Director Bob Hernandez doesn’t mince his words: he thinks it’s already happened.
“People may not know it if they’ve been paying their mortgage,” he says. “But if you have a loan coming due in the next few years, you’ll see values have come down 20 to 50 percent. Even if you’re going along the same as before, bankers will apply market rates to your rolling rents and cap rates and the loan you get will be greatly reduced.” 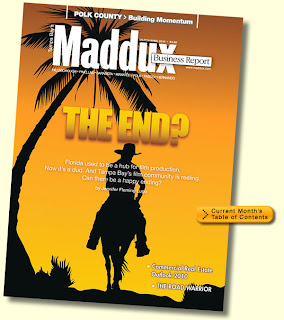 Bill Eshenbaugh, president of the Eshenbaugh Land Co. in Tampa, spoke to the Maddux Business Report from his car in January, driving back from a statewide marketing meeting of commercial real estate brokers in Orlando. Eshenbaugh was a speaker at the event.
“I have to be pretty optimistic to face the market everyday. I told them that I don’t have any distressed real estate. I have righteously priced real estate. Look at values from 1999-2002 and I see what I work with was worth then—it’s worth the same today…
“A guy came up to me after my talk and said, ‘I have notes from what you said last year. Last year you said, “It’s going to take patience and resistance.” And it appears from what was said today, you were right. So I’m writing this ‘righteous pricing’ thing down today and will remind you of it next year.’”
Eshenbaugh pauses.
“What’s the statute of limitations on speeches?”