My latest book: Keep Your Eye on the Marshmallow! (Published 2013) 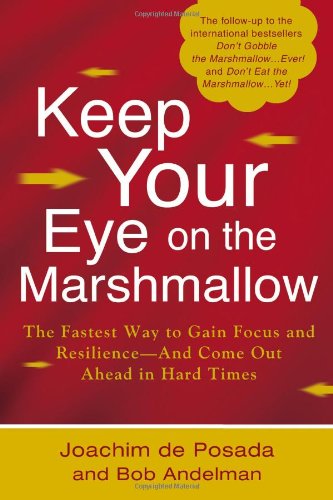 Order ‘Keep Your Eye on the Marshmallow: Gain Focus and Resilience-And Come Out Ahead’ by Joachim de Posada and Bob Andelman, available right now at a great price by clicking on the book cover above!

After facing many hardships and challenges, former chauffeur Arthur has come out on top, happily married and at the pinnacle of his career. But Arthur has always had a dream of starting his own business. In the face of a difficult economy and his own fears of success, Arthur begins to flounder in his new endeavor and forgets all of the principles his former boss, billionaire Jonathan Patient, taught him. Instead of delaying gratification, Arthur begins to eat his marshmallows again.

In Don’t Eat the Marshmallow…Yet! and Don’t Gobble the Marshmallow…Ever!, Joachim de Posada revealed to readers that the secret to success is not merely superior intelligence or hard work, but rather the ability to delay gratification. Now, in Keep Your Eye on the Marshmallow, Posada uses the parable of Arthur’s struggles after reaching the top to teach us that adhering to the marshmallow principle is especially important in uncertain economic times. True success is more than just financial gain or recognition; it’s the ability to balance every aspect of life outside of work—including hobbies, family, and love—in order to enjoy your success, maintain long-term goals, and savor the marshmallows of life.

What’s that you say? You haven’t ordered our new book yet? Do it today! Amazon, http://amzn.to/ThzgtP, and Barnes & Noble http://bit.ly/11T9mNy!

Order ‘Will Eisner: A Spirited Life’ (2nd Edition) by Bob Andelman, available from Amazon.com by clicking on the book cover above!