(This story was written in June 1989. I believe it appeared in Tampa Bay Life later that year. I also believe that some of the original text was lost due to computer incompatibility.) It’s 4:30 p.m. and she’s now an hour late for the shooting of a new edition of “Hooters Nite Owl Theater,” the weekly movie she hosts on WTOG-TV Ch. 44. Her lateness is more gnawing to the production crew because earlier in the day everything was pushed back from 1 to 3:30 p.m. and Lynne is still late.

When she finally arrives – already wearing the Hooters T-shirt and day-glo orange shorts she has made famous on billboards across America – the Ch. 44 staff and Hooters staff go into overdrive. Lynne does a quick, emotion-less read-through of the script as lights are pointed and cameras are put into place.

A plate of freshly made chicken wings on a cheap wooden plate is set before her and Lynne suddenly reaches into her shirt and adjusts her brassiere to accommodate Tampa Bay’s most famous bosom.

“Anybody that can read can do this,” says Lynne between shots.

Lynne Austin is … not every mother’s dream come true.

But Annette Austin has no complaints. While some parents might disown a daughter who repeated bares her essentials to national magazine photographers and videographers, Annette is the true archivist of Lynne’s growing celebrity. A wicker basket beside the couch in her Sarasota home overflows with her daughter’s newspaper and magazine clippings.

“How did you hear about Lynne?” she asks innocently, as if six years on billboards, a spin as Playboy magazine’s Miss July 1986 centerfold and a platinum Video Centerfold weren’t enough. “I guess I just find it real strange that everybody thinks she was a real big deal,” explains Annette as Lynne laughs.

The Austins – Lynne has a younger brother – are a close-knit family considering Annette and Bob have been divorced for more than a decade. They still spend holidays together. And whenever Lynne has an open weekend in her hectic travel schedule, she prefers to spend it hanging out with mom rather than partying with girlfriends.

Annette is Lynne’s business manager and confidante – they speak frankly and bluntly with one another. It is relationship most mothers and daughters would envy.

There was the time in Atlanta she called housekeeping at 6 a.m. one morning saying she needed an iron and the manager – dressed in a three-piece suit – personally delivered it minutes later.

Lynne Austin is not a bimbo.

“We get a lot of angry calls whenever we have her on the air,” reveals Bill Murphy, host of WTSP-TV Ch. 10’s “Murphy in the Morning.” “I guess that’s because Lynne once opted to take her clothes off.”

Ron Bennington has experienced a similar response to her on the radio. 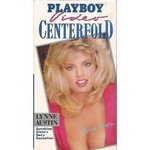 Order ‘Playboy Video Centerfold/Lynne Austin’ in glorious VHS, still available from Amazon.com by clicking on the picture above!

“She was doing our show, taking calls,” says half of the morning team at WYNF 95 FM. “A lady gave the normal, right wing attack, ‘You should be embarrassed about being being in Playboy!’ We took 50 calls defending her. That amazed me. People in Tampa Bay are proud of Lynne. She’s a Tampa Bay icon.”

“She’s great in bed, can I say that much?” jokes Bennington, half of the morning team at WYNF 95 FM. Lynne does frequent promotions with the station. And while Bennington is just kidding, he does bring up the assumption many people have that L.A. is promiscuous. I can speak to this first-hand: a few years ago when I was publishing a struggling local magazine, Lynne was on the cover. For weeks after the issue occurred, The idea that any woman who poses in the nude must be a cheap slut gets no support from anyone who knows Lynne Austin well. People who don’t know her and just see her pictures sometimes assume otherwise.

There is a certain class and intelligence about this woman that draws great loyalty and respect from her friends and business associates. They say sure she’s beautiful, but hey, what a mind on that babe! As if being blonde automatically excludes her from being bright.

There are dozens of men in the Tampa Bay area who boast of having dated Lynne. Or their son, brother or nephew has. The stories are just not true.

Not that Lynne needs anyone to defend her. When a woman called into a Louisville, Ky. radio station where the model was a guest and complained that Lynne and all the other women who posed in Playboy – which her husband buys – were disgusting, Bob Passwaters recalls her response. “Lynne said, ‘Okay lady, how fat are you?’ It ended the conversation.”

While debunking the bimbo myth, this may be a good time to deal with the perception that Lynne Austin is not all Lynne Austin. Rumors have circulated for years that she is the product of plastic surgery and breast enlargement.

Pshaw, says the model, who has heard it all before.

Lynne Austin is a vegetarian.

Have you ever actually seen her eat a chicken wing? Not likely; she hates chicken and only eats it when she’s sick. Even then, only mom’s secret recipe will do. And she hasn’t tasted red meat in six years.

Still, a driving interest of hers continues to be the acquisition of her own Hooters restaurant franchise sometime in the future. “I’ve grown up with the company,” she says. “I know all the ins and outs.” What she doesn’t know, her mother probably does; Annette is manager of the Sarasota restaurant.

Lynne Austin is an inspiration to young women.

In the six years since the first Hooters opened on Gulf to Bay Blvd. in Clearwater and she waited on the first customer, Lynne has gone where few waitresses have gone before. Without any formal training she has modeled, acted, hosted a television program and become a small industry – “Lynne, Inc.” That’s why there’s rarely a shortage of pretty girls interested in becoming Hooters waitresses.

“A lot of the girls have tried for Playboy,” says Lynne; while four have made minor appearances, none have made centerfold or been as much in demand for personal appearances. “We went through ‘Playboy Fever’ where every girl and her sister wanted to be in Playboy. One girl has tried for five years. I told her it’s not for everybody – for some girls, it’s just one big heartache. It’s going to hurt her for a long time because she’s not going to give up.”

Knowing many waitresses aspire to her success, Lynne doesn’t discourage them. “Go after your own goals,” she says. “Let Hooters help you, but do your own thing.”

“In the last five years,” she says, “I dated five guys. I don’t date around. I get one, stick with them ’til they dump me and then I move on.”bleach, “These are the artificial things on my body,” she recites in good humor. “My hair is lightened, my front two teeth are bonded and I wear tips on my nails.”

So has her mother. “They ask me at work,” says Annette.

“Between ninth and tenth grade I grew to this” (she puts her hands on her breasts) “size. I don’t know how many times, on the back of the bus, I had to prove I didn’t stuff!”

“I couldn’t be prouder that she would have the face and body a national magazine would want,” says Lynne’s mom. On the other hand, Annette is still a protective parent. “If she wanted to know if I wanted all the men in America to see my daughter without any clothes – no.”